Dr. Amy Elman: A College Professor Talks About the Impact of Growing Antisemitism on U.S. Campuses

You are here:
INTERVIEWS 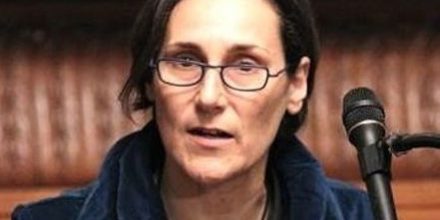 An in-depth interview by Lenny Giteck, publisher and editor

In recent years, antisemitic beliefs and incidents have risen sharply on US college and university campuses, creating a hostile environment for Jewish students and faculty members alike. Some of the rise in antisemitism stems from activities by anti-Zionist, anti-Israel activists who employ swastikas and other Jew-hatred symbols, as well as voicing tropes calling for the destruction of Israel and the killing of Jews. Pro-Palestinian activists regularly intimidate and harass Jewish students on the subject of Israel, stifling any opposing views. A majority of the incidents, however, reportedly reflect classic antisemitism and are not exclusively related to Israel.

Dr. Amy Elman is the Weber Professor of Social Science at Kalamazoo College, a private liberal arts college in Kalamazoo, Michigan. Her research focuses on comparative politics in Europe and the United States.

In addition to numerous scholarly articles, her books include The European Union, Antisemitism and the Politics of Denial (2014); Sexual Equality in an Integrated Europe (2007); Sexual Subordination and State Intervention: Comparing Sweden & the United States (1996); and Sexual Politics and the European Union: The New Feminist Challenge (1996).

We spoke with Dr. Elman about antisemitism in today’s American academic scene.

Dr. Elman, how do you view the current situation with antisemitism on U.S. college and university campuses?

When young people feel they can’t come out on campus as being Jewish, we have a big problem. In the last few years, many Jewish students are quite reluctant to identify publicly as Jews.

How has this expressed itself at your college?

For one thing, courses that used to fill up — my Politics of the Holocaust class, for example — now only have a handful of students. In the past, events like a Holocaust survivor coming to speak… you could pack a room. Every seat would be filled. Now far fewer attend.

How do their Jewish parents react to this?

Based on my own experience in speaking about antisemitism throughout the country, I find that many parents who don’t have kids in school aren’t terribly aware of the problem. And even if they do have kids in colleges and universities, I think a lot of those students don’t want their parents to worry, so they don’t tell them about it. Or if the parents do know, they don’t want to make more trouble for their kids.

What keeps the Jewish students “in the closet,” so to speak?

Young people want to focus on what’s considered politically correct nowadays. Many Jewish students are getting hit from all sides, so they’re less likely to come out and be who they are.

There’s a lot of pressure on them to play the “Jews for Justice” card — which means justice for everyone but them as Jews. They feel called upon to prove how not right-wing they are, how not ethnically “selfish” they are. Again, that’s a huge problem in my opinion. It speaks to the shortcomings of our current campus climate.

One related point about my own campus: Every fall for National Coming-Out Day, there are students who write in chalk on our sidewalks about being gay or lesbian. They’re letting everyone know there are LGBTQ people at our college.

They’re surprised to hear me say how saddened I am by that. I’m not saddened because I’m against students coming out — just the opposite. However, if the way you think you have to express yourselves is by scrawling with chalk on a sidewalk at night to explain you exist, there’s a problem.

As bad as it is for those LGBTQ students — including at schools that consider themselves to be progressive, diverse, and open — I think it’s even worse for Jewish kids. LGBTQ students will at least attend meetings of their campus organizations, but many Jewish students won’t even show up to meetings that address the issue of antisemitism.

How does all this impact your Jewish colleagues?

I’ve heard from colleagues throughout the country that they’re afraid to come out in support of Israel for fear they’ll lose their jobs. Some are afraid to do Israel-oriented scholarship. I even see Jewish students who aspire to become professors and scholars in academia denigrating the Jewish people.

The fast track to having a successful life in the academic world these days seems to be engaging in anti-Zionist rhetoric. A lot of that — not all of it, but a lot — bleeds over into outright antisemitism. Increasingly, the way people who want to portray themselves as progressive do it, in part, by expressing antisemitic ideas.

For those of us who are faculty members, students will do things like not show up in class. They won’t even give you the opportunity to teach them. Or if we say something they find suspect, they’ll roll their eyes or groan. It’s all part of a discussion about “de-platforming,” which is related to “cancel culture.” They’ve even tried to get rid of study-abroad programs to Israel, because the country supposedly is a fascist state.

Antisemitism on campuses must have broader, more far-ranging implications beyond under-attended classes.

It also is a way to deconstruct and delegitimize Jewish studies programs. How do you have a Jewish studies program in which you don’t teach about Israel, or you’re not allowed to visit the country with students? It not only denies Israel’s right to exist, it also denies who we are as a people.

By the way, this is not limited to the academic world; it’s also in the arts world. That is another area where the boycott folks are being very effective. Jewish people in the arts are increasingly afraid. Forget Zionists or non-Zionists; it’s having an impact on everyone who identifies as Jewish, as if being a Jew is something to be ashamed of.

This kind of thing is also felt in the feminist movement, yes?

Absolutely. Much of this started in 1975 with the Soviet Union. At the Soviets’ urging, the U.N.’s International Women’s Conference explicitly condemned Zionism as racism. The “women’s decade” that followed descended into anti-Zionist diatribes and scarcely mentioned women. It was a harbinger of politics to come.

Think about [Palestinian-American activist] Linda Sarsour’s emphatic insistence that Zionist feminists not be allowed in the women’s movement. When some feminists partnered, as they did, with the Nation of Islam, and then claimed the antisemitic Louis Farrakhan is a force of good in society, they ended up with an antisemitic platform.

What about the LGBTQ community?

When lesbians or gay men speak at left-wing rallies and excoriate Israel — which definitely has happened — they obviously don’t have much awareness about Arab gays and lesbians who have found refuge in Israel, or who wish they could seek refuge in Israel. LGBTQ folks are horribly persecuted throughout the Middle East — but when people contrast that with their situation in Israel, self-proclaimed left-wingers refer to it as “pink-washing.”

We live in an age of conspiracy theories, many of which have bolstered right-wing antisemitism. Has this had a similar effect among progressives and the left wing?

To me, there has been a disturbing convergence of the far left and far right in terms of antisemitism. I’ll give just one example from the far left: Angela Davis was on my campus several years ago, talking about how Israel is responsible for what happened in Ferguson, Missouri.

Why is Israel responsible for Ferguson? Because supposedly Israel trained rogue police officers to go after African Americans. In reality, Israelis did train some U.S. police departments in techniques for subduing terrorists. To claim the training somehow was aimed at targeting Black people… preposterous. Unfortunately, there was little or no pushback against what she said.

Of course, Jews have long been the target of conspiracy theories. In the Middle Ages, European Jews were accused of deliberately poisoning wells to spread the bubonic plague. There’s the ancient blood libel — that Jews kill Christian babies to bake their blood into Passover matzah. There are many, many such examples. Unfortunately, this is nothing new.

Mark Weitzman: Part Two — The Impact of the Infamous Publication ‘The Protocols of the Elders of Zion’
May 30, 2021